This is a great guest blog by Ian Hendra from Clearline Services.  This was first published in New Zealand's QNewZ back in 2012.It is still very pertinent now.

Here are a couple of scenarios:

You have to drive 350km to get to your vacation destination. You've been driving down the highway for an hour or so and suddenly it all goes quiet under the bonnet….you coast to the side of the road and roll to a halt…only then do you notice the fuel gauge is on E. You're surprised because, being a good manager, you had your KPIs all lined up. You knew how far you had to drive and you'd had the car serviced. You'd filled the car's tank last weekend just as usual. You knew your fuel consumption was about 9 litres per 100 km; so you expected to have plenty of fuel for another hour at least.

Rusty Buckett is CEO of Buckett Enterprises Ltd, my favourite manufacturers of shiny metal buckets for manual milkers. Liza Dear, his Quality Manager, tells him in high dudgeon that one of BEL's best customers has complained about a leak in a new bucket, and this is the second time in three weeks. Rusty tells her to replace the faulty buckets but don't worry about it because it hasn't happened before. "First time in 30 years, so it can't be a prob, can it Liza?"

Curious, he checks what he calls his "KPIs". Last month's sales were OK, debtors were not a problem, stock turn was OK, financials were OK, the monthly hygiene check was OK. He checks out the production inspection sheets for the batches in question and they were all OK, too. And nobody from production had grumbled about anything going wrong. In the end he puts Liza's frustration down to a lack of understanding and moves on to more serious matters. 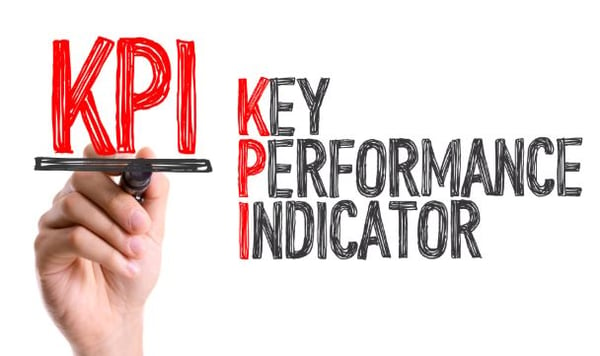 A KPI is a ‘leading’ indicator that shows a ‘state of readiness’. It tells us something about what is likely to happen; next month, for instance.

A KRA is a ‘lagging’ indicator, a ‘result’ that tells us what did happen, last month for instance.

Using KRAs as the main source of management information is, as Dr W Edwards Deming put it so eloquently, like trying to drive forwards by looking in the rear-view mirror.

There are serious risks that you won't get where you want to go and you'll hit something along the way. Or looking at it another way, another way to spot the difference is that KPIs are about things we can change right now to affect what happens next. KRAs are about history and the curse of hindsight.

Back to the scenarios...

On the road trip, the only KPI that mattered was the reading on the fuel gauge. With the exception of meeting the service schedule, all the rest were KRAs that in effect only served to confirm the accuracy of the fuel gauge. If you'd looked at the fuel gauge before you left, you could have changed what it told you by filling up with fuel. It was relying on KRAs that let you down....and not knowing that your daughter had borrowed the car for a trip to the beach on her day off from varsity (sons do stuff like that too).

As for Rusty's leaky buckets, that he had no production process performance measures shows that he had no real inkling of variability and its inevitable consequences.

Had he investigated deeper, by setting up meaningful internal audits, for example, he might have found that his production staff continually tampered with equipment to make it ‘work better’; that holes had indeed been a problem in the past but nobody had worked out how to adjust the process to avoid them. So he relied on ‘quality’ inspectors to find and reject the defectives. Had he run proper process validation when the production line was commissioned and had developed production control charts subsequently, he would have had KPIs. He could then have responded to the trends in the control charts and completely avoided his customers having to tell Liza "there's a hole in my bucket".

At the time, he had no KPIs at all because pass/fail inspection is a KRA. In the end he got what he measured; namely, confirmation from his customers that he was not controlling his production process with the intention of avoiding rejects. Not only that, but he was happy to use his customers as his final QA check! Once again, as Dr Deming told us, you can't inspect quality into a product or service, it has to be designed in from the outset (and that means understanding and managing the production processes).

You shouldn't have one without the other

In reality you ought to have both KPIs and KRAs; and they should be reciprocals. Each lagging indicator needs its lead, because you can control the future; the past has gone.

KPIs enable you to exert timely control before things turn to custard; KRAs confirm how well your custard controls work in reality.

The point here is that once the KRAs have validated the effectiveness of your KPIs, you might not need them anymore!

This table illustrates the point - but it's far from complete. 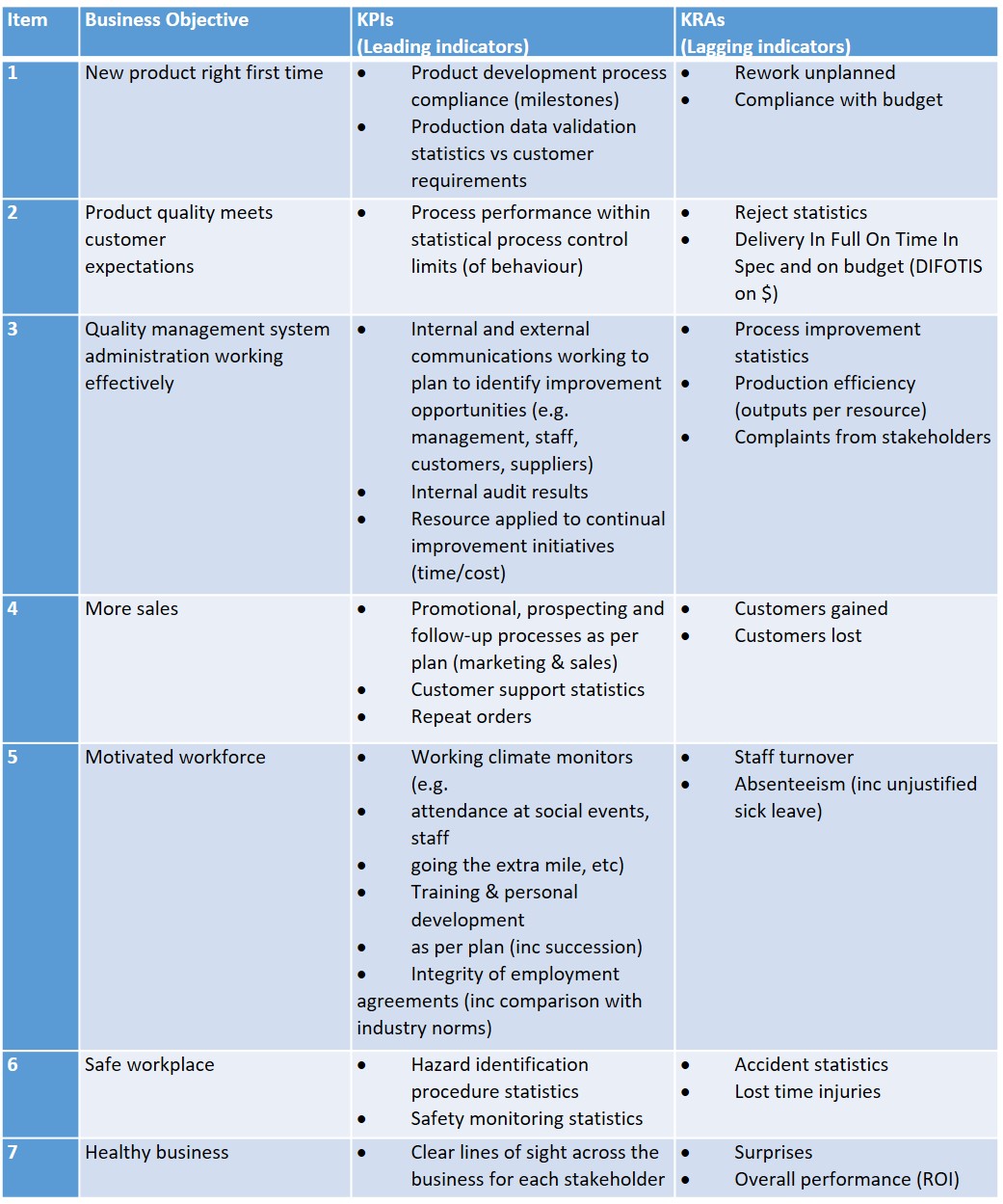 The message is that if you have cases of one without the other in your quality system you're missing some vital links; not only that, but if you're relying on KRAs your chances of making any progress are minimal.

For more information on any of the above please email Ian: ian.hendra@clearlineservices.co.nz